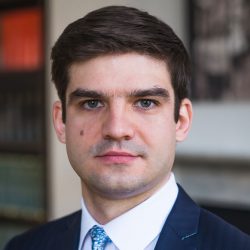 Chambers & Partners recognise Tom “for his considerable expertise in matters at the intersection of financial services regulation and employment law.”

Tom is the co-editor of Conduct and Pay in the Financial Services Industry: the Regulation of Individuals, with Richard Leiper QC.

He is a Barrister Director of the School Exclusion Project, and an Honorary Visiting Lecturer at the City Law School, University of London in relation to the same.

Tom is a member of the ‘C Panel’ for both the Attorney General’s and Equality and Human Rights Commission’s Panel of Counsel.

Tom has also acted in cases in the Dubai International Financial Centre (DIFC).

Tom acts in a range of industries for individuals and regulators in both professional discipline  and general regulatory matters.  He has particular experience in the financial services industry, as well as the legal, education and accountancy fields.

Tom acts for and against the Financial Conduct Authority and Prudential Regulation Authority in a range of matters.

Tom’s most recent case in the public domain is the FCA’s decision in Paul Stephany’s case (Final Notice). Mr Stephany’s case was the first individual disciplinary case to arise from the FCA’s new competition jurisdiction, and the first case to address the conduct of the buy-side in IPOs. Tom also represented Mr Stephany in his Employment Tribunal proceedings (see below).

In the legal year 2013/14, Tom was seconded to the FCA, during which he sat in the Enforcement Division’s Legal Group and in the General Counsel Division. Whilst on secondment, Tom drafted submissions to the Regulatory Decisions Committee (RDC) and appeared at the FCA’s Regulatory Transactions Committee (RTC). In GCD, Tom drafted sections of the FCA Handbook.

Tom is frequently asked to advise and assist in the following areas:

Tom has advised on matters including disciplinary proceedings against by Ofqual against recognised bodies, National College of Teaching and Leadership proceedings against teachers, and a variety of matters relating to the governance of academies and local authority maintained schools.

Tom has acted in a range of cases concerning questions of compliance with accountancy standards, including the International Financial Reporting Standards.

Tom appears in domestic tribunals of all kinds.  He recently represented the National Executive Committee of the Labour Party in National Constitutional Committee proceedings in which a member was accused of anti-Semitic abuse.  He is also an appointed investigator for a professional association, for which he has carried out a number of investigations.

Tom advises and acts in the full range of employment tribunal, County Court and High Court proceedings, including matters relating to restrictive covenants, penalty, and statutory employment law.  He regularly appears in multi-day trials in the Employment Tribunal, particularly in relation to whistleblowing.

Tom is particularly sought-after by individuals and firms in the financial services industry on account of his expertise in both financial regulation and employment law, on which Tom frequently advises in tandem.  He also regularly acts for NHS Trusts and other public bodies, particularly in education.

Examples of Tom’s work include:

Tom acts in a range of discrimination and equality matters in the County Court, Employment Tribunal and First-Tier Tribunal (see also the ‘Education’ section below).  Examples of Tom’s cases include:

Contract / fraud: appeared in a number of contractual claims in the County Court, including claims for fraud and debt claims.  Tom advises on contentious bonus matters.  He has advised on a range of misselling claims including in relation to foreign-exchange accumulators and interest-rate hedging products.

Business protection: advised on a range of issues relating to confidential and privileged information, restrictive covenants and competitive threats.

Company & Partnership: Tom has advised on a range of company matters including the removal of directors.  He has advised on the liabilities and property of partners in both LLPs and general partnerships.

Procurement: advised on a range of procurement matters, including relating to award criteria and modifications to contracts.  Tom was instructed by the Treasury Solicitor to assist in Mansfield DC v Secretary of State for Communities and Local Government [2014] EWHC 2167 (Admin), a judicial review relating to an alleged breach of the public procurement rules.

Tom is instructed to act in a range of administrative law matters, including regulatory and education matters described elsewhere in this profile.

Tom has particular experience of the Firefighters Pension Schemes and issues relating to injury awards.  He completed a lengthy investigation in relation to the payment of injury awards at Buckinghamshire and Milton Keynes Fire Authority in 2015, the interim report for which is available here.  He has advised a number of fire authorities on similar matters.

In 2016, Tom was instructed to act for the FCA, who was an interested party in a judicial review of the Financial Ombudsman Service brought by Admiral Wealth Management.  He has separately advised in private practice on FOS determinations.

Tom was instructed by the Treasury Solicitor to assist in the preparation of the evidence for the judicial review R(C) v Secretary of State for Work and Pensions [2014] EWHC 2403 (Admin).

Tom has advised on questions of ordinary residence in the care context.  He has also advised on the law of highways.

In early 2015, Tom completed a long-running inquiry as sole investigator into accounting issues relating to the payment of injury awards at Buckinghamshire and Milton Keynes Fire Authority.  His interim report is available here.  Tom was required to assess the scale of the financial problem; identify opportunities to discover the accounting failure; detail the factual circumstances in which the error came about; and to make recommendations.

Tom’s education law practice encompasses discrimination claims, contractual issues, and special educational needs.  He has a particular specialism in exclusions.  Prior to joining the Bar, Tom was a teacher at the London Boxing Academy Community Project, for teenage boys, many of whom had been permanently excluded from school.

Tom appears in the High Court, First-Tier Tribunal and the County Court in relation to his education work.

“He does an excellent job of making the dry and labyrinthine regulations clear.” Chambers & Partners

Tom is the co-editor of Conduct and Pay in the Financial Services Industry: the Regulation of Individuals (with Richard Leiper QC), Informa from Routledge, 2017.

Boxing Clever, (2012), Civitas.  This book describes Tom’s career prior to the Bar, in which he was a teacher at the London Boxing Academy Community Project in Tottenham, North London, a school which catered for teenagers who had been expelled from mainstream schools.

Tom Ogg, Anna Zimdars, and Anthony Heath (2009) ‘Schooling effects on degree performance: a comparison of the predictive validity of aptitude testing and secondary school grades at Oxford University’, British Journal of Educational Research, Vol. 35(5) pp.781 – 807 (concerning the impact of attending either a state school or an independent school upon performance in final examinations at Oxford University).

Tom is an editor of 11KBW’s Financial Regulation Briefing.

Full name (as registered with Bar Standards Board of England and Wales): Thomas Ogg