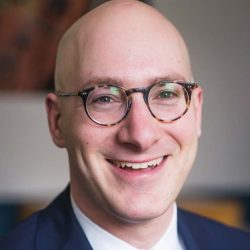 Julian is recommended by the legal directories as a leading junior, with the most recent edition of Chambers and Partners commenting: “His advocacy is brilliant, he’s excellent with clients, his written advice is always on point and he always thinks ahead.”

The directories have consistently observed that he is able to “explain very complex areas of law in a very straightforward manner”, providing “clear, user-friendly advice”. He has been recommended as “the most user-friendly barrister” and “extremely personable and great to work with”.

Julian acts in a wide range of public law, media and information law and commercial law fields. In the past 12 months he has acted in the largest ever sanctions challenge before the Commercial Court, defended a global technology company in a highly contentious data breach case and acted for a party in the Grenfell Tower Inquiry.

As an experienced member of the Attorney General’s Panel of Counsel, Julian regularly acts for HM Government in some of its most sensitive cases, from the Administrative Court and Special Immigration Appeals Commission right up to the Supreme Court.

Julian has a broad public law practice spanning the High Court, Court of Appeal and Supreme Court. He advises governments, corporations and individuals on judicial review challenges, draft and final legislation and challenges to the decisions of ombudsmen, regulators and other public authorities.

Examples of Julian’s work in this field includes the following:

In addition to Julian’s general public law practice, he also regularly appears in public inquiries. He has been instructed in the Grenfell Tower Inquiry, the Independent Inquiry into Child Sexual Abuse, and the Brook House Inquiry (see the ‘Inquests and Inquiries’ section below).

Julian also regularly acts in challenges against regulators and ombudsmen. He has acted in matters concerning the Financial Ombudsman Service, the Office of the Immigration Services Commissioner, the Information Commissioner and MedCo.

Julian has substantial experience in matters relating to the media, including contempt of court, data protection, privacy and information law. He regularly advises and appears on behalf of individuals, the government and corporations before the High Court, County Court and Tribunals.

Julian is an experienced practitioner in proceedings under the General Data Protection Regulation (GDPR), Data Protection Act 2018 (DPA) and Freedom of Information Act 2000 (FOIA). He has appeared in several of the leading appeals before the Upper Tribunal and advises individuals, corporations and governments on information rights issues and disputes.

The most recent edition of Legal 500 recommends Julian as a Leading Junior and describes his practice as follows: “He has an enormous breadth of experience and understanding of a rapidly developing field and is very switched on.”

Julian has particular expertise in inquests and inquiries work and has a broad range of experience. Examples of his work includes:

Julian acts for the Department for Business, Energy and Industrial Strategy in this high profile public inquiry into the circumstances leading up to and surrounding the fire at Grenfell Tower on the night of 14 June 2017.

Julian is lead counsel for the Home Office in this inquiry into the mistreatment of detainees at Brook House Immigration Removal Centre which followed an undercover Panorama documentary.

Julian acted for a local authority and a group of charitable and religious organisations in this long running inquiry into child sexual abuse.

MA & BB v Secretary of State for the Home Department

Julian represented the Home Office in this leading case on the investigative requirements contained within Article 3 ECHR.

Inquest into the death of Ella Kissi-Debrah

Julian is instructed in this ground-breaking inquest into the death of a young child suffering from asthma. It is the first Article 2 ECHR inquest to examine the role of air pollution as a cause of death.

Inquest into the death of Osman Ahmednur

Julian appeared for a local authority in this inquest into the death of a young asylum seeker. The inquest addressed issues concerning a ‘suicide cluster’ of young Eritrean asylum seekers.

Inquest into the death of Naser Ahmed

Julian acted for a local authority in this inquest into the death of a child at school following an allergic reaction. The inquest brought to national attention issues surrounding the use of an epi-pen.

Julian has also provided specialist advice in connection with the Inquest into the Death of Jean Charles De Menezes and the Inquest into the death of Mark Duggan. With a background in criminal litigation and national security matters Julian is also experienced at advising in connection with the privilege against self-incrimination (and seeking undertakings from the Attorney General) and the use of sensitive material before inquests and inquires.

Julian’s commercial practice has a strong focus on sanctions, advising companies, individuals and governments on potential liabilities as well as challenges to listings and financial restrictions measures. He was instructed for several years in the long running Bank Mellat litigation, including the $4bn damages claim in the Commercial Court and multiple appearances in appellate courts.

In its recommendation, Chambers and Partners 2019 cited Julian’s work “in significant PIL cases including challenges against the imposition of financial sanctions”.

Because of Julian’s background in public international law he is also regularly called upon to act and advise in matters concerning the taking of evidence for use in foreign proceedings, including under the Hague Convention and the Evidence (Proceedings in Other Jurisdictions Act) 1975. This includes:

• Gubarev v Buzzfeed [2018] EWHC 1201 (QB) – Request by a Florida Court for the examination of Christopher Steele concerning the Trump Dossier.

• Lodestar v Bacardi – Request by a California Court for documentary evidence and examination of witnesses concerning a trademark dispute.

Julian is also experienced in sensitive corporate investigations. This includes being instructed for over 12 months by a multinational media company in relation to an internal investigation into allegations of interception of communications, corruption and misuse of private information. Julian’s criminal practice makes him well placed to advise on issues where both commercial and potential criminal liabilities overlap.

For the first few years of Julian’s career, he appeared regularly in the Crown Court, both prosecuting and defending. He has subsequently developed a niche criminal practice, concentrating on public law challenges to corporate criminal investigations, data protection offences and other complex matters relating to the criminal justice system.

Examples of his work in this filed include:

Julian also acts in other matters relating to criminal justice more broadly, including inquests into the death of prisoners, challenges to prison categorisations and complex criminal appeals. He is an author of EU Law in Criminal Practice (Oxford University Press) and has acted as a practitioner editor of Blackstone’s Criminal Practice.

“Amazingly hard-working, sensible and down to earth” (Chambers and Partners 2021)

“One of very few barristers who has a deep understanding of both criminal and civil litigation, experience which he deftly brings to bear in the field of data protection litigation.” (Legal 500 2021)

“His advocacy is brilliant, he’s excellent with clients, his written advice is always on point and he always thinks ahead.” (Chambers and Partners 2020)

“Very unassuming but massively hard-working, reliable and tough when required.” (Chambers and Partners 2020)

“He has an enormous breadth of experience and understanding of a rapidly developing field and is very switched on.” (Legal 500 2019)

“The most user-friendly barrister I’ve ever instructed. He completely understands clients’ concerns. He’s always one step ahead and can predict things that’ll come up.” (Chambers and Partners 2019)

“Extremely personable and great to work with” (Chambers and Partners 2019)

“He manages to explain very complex areas of law in a very straightforward manner. He manages to make even the most complex subjects sound straightforward. His advocacy is excellent. His biggest selling point is his manner and client care. He is very friendly, approachable and always goes over and beyond what you would expect.” (Chambers and Partners 2018)

“Clients just love him. He works hard for them and understands their concerns and business. Lay clients also appreciate him because he is able to explain complex areas of law in an accessible manner.” (Chambers and Partners 2017)

“He is a very good lawyer, very quick, writes well and is good under pressure but has a joke when you need it.” (Chambers and Partners 2016)

“He has excellent people skills, is very good with clients and always one step ahead of everyone else.” (Chambers and Partners 2016)

[2018] EWHC 512 (QB)
Instructed by the Foreign and Commonwealth Office to intervene in the application made by Christopher Steele to set aside an order requesting that he give oral evidence pursuant to a letter of request from the United States District Court for the Southern District of Florida. The case concerns defamation proceedings arising from the publication of the “Trump Dossier”.

R (on the application of AZ) v Secretary of State for the Home Department
[2017] EWCA Civ 35
Instructed in a challenge to the refusal of a refugee travel document following an assessment that the claimant would travel to Syria. The Court of Appeal recently handed down judgment supporting the Secretary of State’s decision not to disclose further information for reasons of national security.

Rahmatullah (No 2) v Ministry of Defence, Mohamed v Ministry of Defence
[2017] UKSC 1, [2017] 2 WLR 287
Instructed in the Supreme Court challenge concerned the nature and content of the doctrine of Crown act of state in the context of claims relating to detention in Iraq and Afghanistan. The appeal successfully upheld this defence, which had last been applied in the 19th Century.

Al Waheed v Ministry of Defence, Mohammed v Ministry of Defence [2017]
UKSC 2, [2017] 2 WLR 327
Instructed in the Supreme Court challenge concerning allegations that persons in Iraq and Afghanistan were unlawfully detained in breach of article 5 of the European Convention on Human Rights by HM armed forces acting under mandates from the United Nations Security Council.

R (on the application of Bancoult) v Secretary of State for Foreign and Commonwealth Affairs (No 4)
[2016] UKSC 35, SC, June 29 2016, [2016] 3 WLR 157
Instructed in the Supreme Court challenge. This case considered whether, and in what circumstances, the Supreme Court may set aside a previous decision of the House of Lords. The application concerned alleged material non-disclosure concerning the resettlement of the Chagossians.

R (on the application of Miranda) v Secretary of State for the Home Department and Commissioner of Police for the Metropolis
[2016] EWCA Civ 6, CA, January 19 2016, Times, February 19 2016
Instructed in this well known challenge to the use of Schedule 7 to the Terrorism Act 2000. The case concerns David Miranda, partner of Glen Greenwald who was detained in connection with the material taken by Edward Snowden.

Roberts v United Kingdom
Application no. 59703/13, January 2016
Instructed as sole counsel in this challenge before the European Court of Human Rights concerning the farness of the domestic jury trial / selection system and compatibility with Article 6 ECHR.

Prior to joining the Bar, Julian worked for the Foundation for Human Rights Initiative in Uganda, assisting offenders facing capital punishment.

Full name (as registered with Bar Standards Board of England and Wales): Julian Blake