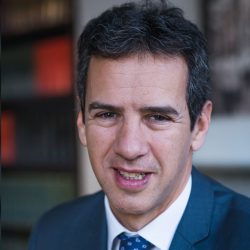 Jason Coppel’s practice focuses on public law, procurement law and information law, with particular emphasis on EU law and human rights issues. He has appeared regularly in the Supreme Court and the Court of Justice of the European Union, and in many of the leading cases of recent years, including the Article 50 TEU litigation, Miller v Secretary of State for Exiting the European Union. He is ranked by the directories as a leading barrister in administrative law, civil liberties, EU law and procurement law. He was the Legal 500 EU and Competition Law Silk of the Year 2018. He is a Deputy High Court Judge.

Jason has a wide-ranging judicial review practice, representing claimants, NGOs and central and local government. His significant recent cases include:

R (A and B) v Secretary of State for Health
[2017] 1 WLR 2492
Supreme Court litigation finding no duty on the NHS to fund abortions for women travelling to England from Northern Ireland.

Jason is widely recognised as one of the leading silks practising in procurement law. He has conducted procurement litigation since 1998 and has been instructed in many of the landmark domestic cases. He also has an extensive advisory practice, specialising in issues such as the application of procurement law to development agreements and other property deals, the permissible grounds for variation of existing public contracts and the contracting authority status of quasi-public bodies such as universities.
His notable recent cases in this field include:

R (Wylde) v Waverley BC
[2017] PTSR 1245
Leading case on whether objectors to development can have standing to rely upon the Public Contracts Regulations.

R (Fair Crime Contract Alliance) v Lord Chancellor; Kaim Todner and ors v Ministry of Justice
Procurement and JR challenges by criminal law solicitors to the tender process for duty provider contracts, the largest and most complex procurement to be conducted by a Government Department. Resulted in the abandonment of the tender process.

Jason has developed an extensive practice in data protection and freedom of information cases, and prior to taking silk he was a member of the Attorney General’s Freedom of Information Panel and of the panel of counsel instructed by the Information Commissioner. His notable cases include:

Magyar Helsinki Bizottság v Hungary
[2016] ECHR 975
Represented the UK Government intervening before the Grand Chamber of the European Court of Human Rights on the issue of whether Article 10 ECHR confers a right to freedom of information.

Edem v Information Commissioner and Financial Services Authority
[2014] EWCA Civ 92
Represented FSA in appeal regarding the definition of “personal data” in the Data Protection Act 1998 and the impact of the Durant case.

API v Commission
[2011] 2 AC 359
Represented the UK Government in leading case on access to information held by the EU institutions.

Jason has appeared acted extensively in EU law litigation both in the domestic courts and in the CJEU. He has been heavily involved in issues raised by the EU referendum and the Brexit process.

R (Shindler) v Lord President of the Council
[2016] HRLR 14
Represented the defendant in proceedings to challenge the franchise for the EU Referendum by long-term expatriates living in other EU Member States.

R (HC) v Secretary of State for Work and Pensions
[2017] 3 WLR 1486
Represented defendants to multiple challenges to regulations which remove benefits entitlement from claimants with a right of residence under the CJEU ruling in Zambrano.

Jason has acted in several cases concerning the fall-out from Cheshire West and the Re X litigation, including Re NRA [2015] EWCOP 59 and Re JM [2016] 4 WLR 64 in which the Court of Protection has dealt with issues of representation of incapacitated persons. He also acted for the Government in a recent challenge brought by local authorities to the funding made available for the deprivation of liberty safeguards: R (Liverpool City Council) v Secretary of State for Health [2017] EWHC 986 (Admin). He has acted as legal advisor to Essex University’s Autonomy Project, in particular on its study of compliance of the Mental Capacity Act 2005 with the Convention on the Rights of Persons with Disabilities.

Jason’s extensive experience of pensions law has included long-running discrimination litigation regarding access to pension rights, age discrimination issues, the Local Government Pension Scheme and advising and representing the Department for Work and Pensions on the British Steel Pension Scheme, Guaranteed Minimum Pensions and state pension rights for transsexuals. Most recently, he has advised the PPF on levy and other issues.

Hampshire v Board of the Pension Protection Fund
[2016] Pens LR 281
Compatibility with EU law of the statutory cap on PPF compensation referred to the CJEU.

MB v Secretary of State for Work and Pensions
[2017] 1 All ER 338
Supreme Court referred questions to CJEU concerning compatibility with EU law of refusal of state pension on grounds that a transsexual person had not obtained a Gender Recognition Certificate on account of being married.

Walker v Innospec
[2016] ICR 182
Whether the Framework Directive requites equal payment of survivors’ pensions accrued before it came into force. Pending before the Supreme Court.

Chambers and Partners 2021 edition has said Jason is extremely good on technical arguments, and excellent at identifying and homing in on the one or two points that will win a case. The court takes him very seriously”, “he really fights his client’s corner”, “he’s extremely bright, strategic and user-friendly”, “provides fantastically clear and practical advice, and is a compelling advocate”, “he’s hardworking and technically outstanding”, “he is an extremely powerful and effective advocate and is genuinely respected by the judiciary”.

Jason has been described in the 2021 edition of Legal 500 as an “excellent leader who is receptive and adaptable. Has the ear of the court”, “one of the top two performing QCs”,  “Jason is one of the best public law silks around. His written work is superb and his advocacy is excellent. He is a pleasure to work with”, “he is highly organised and someone you don’t want on the other side”.

Chambers and Partners has said about him that he has “laser-like precision and clear, commercial legal advice. Inspires real confidence … He is wonderfully clear and persuasive in court … a top-drawer silk for frontline cases”.

Chambers and Partners has also said about Jason: “he is very, very sound, and very well-liked by clients”, “is extremely able, and a very impressive opponent”, “provides astoundingly clear and thoughtful written advice, and is very sensible”, “extremely good technically and very knowledgeable in public procurement”, “extremely good, feared as an opponent and a very welcome member of the team when an ally”, “he is crisp, to the point and doesn’t go on. He’s sophisticated on information systems, and delivers a seamless service” and he “has a detailed understanding of information law, as well as an ability to provide clear strategic advice. You can have confidence in his judgment”.

Jason has been described in Legal 500 as a “a creative thinker and a determined fighter in court”, “he is popular with clients and very easy to work with”, “he has outstanding knowledge and experience of human rights law”, “he always brings a fresh perspective to a case”, “he knows which points to emphasise for maximum effect”, “a very measured advocate who is taken seriously by the judges” and as having a “rare ability to make difficult concepts sound straightforward”, “a market leader in the making”.

Full name (as registered with Bar Standards Board of England and Wales): Jason Coppel QC