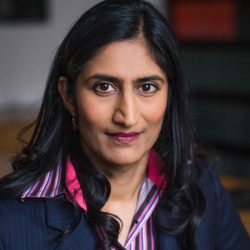 Harini Iyengar specialises in Employment, Discrimination and Equality, Regulation and Discipline, Education, Commercial, Information, Partnership, and Procurement law.  She has practised at 11KBW ever since her Call to the Bar in 1999 as a seven-months-pregnant pupil barrister.  Harini is a Governing Bencher of the Honourable Society of the Inner Temple, has sat for several years on the Steering Group of the Temple Women’s Forum and the Bar Council Retention Panel, and was a First 100 Years Ambassador.  Harini gave expert legal evidence to the House of Commons Inquiry into high heels and workplace dress codes and is regularly interviewed as a legal expert in the media, including on “Newsnight” and “Victoria Derbyshire”.  She is the author of “A Practical Guide to the Law of Gender Pay Gap Reporting”.

Harini is also an experienced Director, currently an Independent Governor at a University, and holds the Institute of Directors Award in Finance for Non-financial Directors.  She presented a paper on equal pay as part of the Women’s Budget Group delegation to the International Association for Feminist Economics annual conference.

Most of Harini’s instructions come through solicitors, but she also accepts instructions directly from business owners, directors and individuals under the public access rules, in suitable cases.

Harini successfully persuaded an Independent Review Panel to remit a decision to a Governing Body concerning the exclusion of a pre-teen girl for “sexting” and sexual misbehaviour, who was being groomed by a third party

Anger-Kraavi v University of Cambridge
Harini represented in the Employment Tribunal a senior woman academic who brought claims of victimisation alleging that the University had not abided by the promises made in the settlement agreement for her first case, in which she had brought claims of equal pay, sexual harassment, unfair dismissal and sex discrimination.

As a senior-junior, with a wealth of broad-ranging local government and TUPE expertise, Harini has successfully diversified into procurement and represented several claimants in the criminal legal aid duty provider litigation.

Performance Management and Substance Addiction in a Traditional Partnership
Advising the managing partners of a traditional partnership on a sensitive and complex matter involving performance management and substance addiction relating to a senior equity partner.

Solicitor Partner v Solicitors LLP
Represented a solicitors limited liability partnership facing high-value and bitterly-contested claims from a partner involving serious allegations of financial and regulatory impropriety against the LLP, whistleblowing and expulsion from the partnership.

Her employer clients include City financial institutions, manufacturing and IT businesses, law firms, public bodies, universities, retail giants, charities, health authorities, local councils, and small businesses. She has represented workers from all walks of life, from City traders and elite professionals through to low-paid council workers bringing multiple union-backed claims and a victim of human trafficking held in domestic servitude. In July 2016, Harini gave expert legal evidence to the House of Commons inquiry into high heels and workplace dress codes.

Beatt v Croydon Health Services NHS Trust
[2017] EWCA Civ 401
Harini won in the Court of Appeal, having represented Dr Beatt (the consultant interventional cardiologist) in the Employment Tribunal and the Employment Appeal Tribunal.  In their judgment in the long-running widely-reported whistleblowing case, the Court of Appeal gave important guidance on the differences between the tests for unfair dismissal and unfair dismissal for making a protected disclosure.

Teacher v Further Education College
Advised in conference and drafted claim for a teacher bringing whistleblowing claims against a further education college, with complicated facts including a complex disciplinary matter.

Annals v Commissioner of Police of the Metropolis
Harini successfully defended the Met Police from an unusual claim of sex discrimination brought by a male firearms officer who had been refused a career break.

Project and Export Financier v Major Investment Bank
Harini advised and drafted a very high-value complex equal pay claim for a woman financier in project and export, including claims for like work and work of equal value, and a novel claim under s 71 of the Equality Act 2010. The case settled at the door of the court before a multi-day hearing.

Burke v Camden and Islington NHS Foundation Trust
Harini defended an NHS Foundation Trust facing complex disability discrimination claims from a current and long-term employee, who had a very unusual and complicated mental health condition, whose vulnerabilities also necessitated reasonable adjustments to be made in the Tribunal to the method of cross examination. Harini has been trained to work with vulnerable witnesses.

Discrimination in Education / the Provision of Services:

Advised a Christian charity
On lawfulness of a requirement in a job specification to be a practising Christian.

Kistruck v Battersea Dogs’ Home: harassment on ground of sexual orientation
Successfully represented Respondent in claim involving allegations that a lesbian junior employee had been sexually harassed at work by her lesbian boss, following the break up of their former romantic relationship.

Beatt v Croydon Health Services NHS Trust
[2017] EWCA Civ 401; CA, May 23 2017; [2017] IRLR 748
The EAT had been wrong to overturn an employment tribunal’s finding that a consultant cardiologist had been dismissed because he made protected disclosures

Legal Advisor to Disciplinary Panel
Harini acted as the legal advisor to a disciplinary panel of a public body considering very sensitive allegations of serious misconduct against a senior officer.

Peak v South Buckinghamshire County Council
Harini successfully defended a county council from a sensitive claim of unfair dismissal brought by a senior officer who had been dismissed for serious sexual misconduct towards a vulnerable service user.

Harini Iyengar is a popular choice as Independent Investigator with a range of prestigious companies and institutions because of her many years of expertise in complicated fact-based discrimination claims and her ability to establish a good rapport with witnesses in order to ask penetrating questions on sensitive topics.  Clients also appreciate her skill and experience in working with vulnerable witnesses, for example, witnesses suffering from stress, depression or other mental health conditions and those who have experienced bullying and discrimination.

As Independent Investigator, Harini recently conducted an independent investigation for a well-known university into very serious whistleblowing allegations of improper and unlawful conduct on the part of very senior staff.

Harini was the sole Investigator for a Listed National Infrastructure business, appointed in accordance with an out of court settlement of very high value race discrimination litigation. It was a substantial investigation which required her to hear witness evidence and consider extensive documentary evidence in order to make findings of fact about 44 allegations of bullying and race discrimination.

Harini conducted an independent investigation into market-sensitive allegations of misconduct and inappropriate behaviour in a high profile finance business, which arose out of a clash between two very senior personalities.

Harini was instructed as a member of the Independent Review Panel set up by Cardiff University Medical School to examine race equality following the disciplining of 31 medical students after their performance in a student revue which included “blackface” and other offensive aspects.  The Panel considered extensive documentary evidence and spent two days hearing witness evidence. All 13 recommendations were publicly accepted by Cardiff University.

“She is very good and really knows her stuff” Chambers & Partners

“Harini is very thorough in her preparation, and has a great intellect as well as a good appreciation of commercial realities, resulting in an all-round package of high-quality, pragmatic advice” Legal 500

“Harini is very calm under pressure and has a wealth of knowledge and experience. Very quick to grasp both the legal issues and commercial realities.” Legal 500

“A very engaging speaker whose advocacy shines; she is also excellent with her clients and really good at client management.” Chambers & Partners

“Listens carefully to clients and reflects their instructions with well-constructed advice.” Legal 500

“Very calm under pressure and has a wealth of knowledge and experience.” Legal 500

“Very methodical and bright. She is confident, really easy to deal with and very client-friendly.” Chambers & Partners

“She is very accessible and focused on achieving the best outcome.” Chambers & Partners

“She is extremely responsive and has great attention to detail.” Legal 500

“She is very quick to grasp both the legal issues and commercial realities.” Legal 500

“She is knowledgeable about the subject and provides clear, comprehensive and helpful advice.” Chambers & Partners

“She is excellent. Extremely cool under pressure and not fazed by anything.” Chambers & Partners

“She is very passionate about what she does” Legal 500

“She provides thoughtful advice that goes beyond the law” Legal 500

“She is extremely responsive and has a great attention to detail. She is also really client-friendly.”  Chambers & Partners

“She is a pleasure to deal with, and shows conscientiousness and knowledge of her subject” Legal 500

“She is sharp-witted, perceptive and an experienced cross-examiner” Chambers & Partners

“Undertakes a wide range of employment law work with particular focus on complex disputes, including remuneration and restrictive covenant enforcement issues. Her employment practice is bolstered by her extensive knowledge of education and procurement law.” “She is extremely responsive and has a great attention to detail. She is also really client-friendly.”  Chambers & Partners

“She is sharp-witted, perceptive and an experienced cross-examiner” Chambers & Partners

“She is very good at getting to the issues that matter quickly, and presents her cases to best advantage” Legal 500

“She brings confidence to both instructing solicitor and client” Legal 500

“She provides high-quality advice, and is genuinely interested in her clients” Legal 500

Harini Iyengar appeared on  Newsnight  on 24 October to discuss compensation and non-disclosure agreements in sexual harassment cases in light of the Harvey Weinstein allegations.

Click here to watch (Harini’s item is from 34 mins)

Full name (as registered with Bar Standards Board of England and Wales): Harini Iyengar