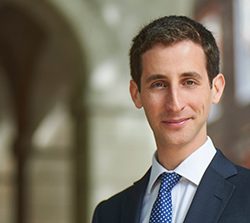 Stephen Kosmin’s practice extends across financial services law, commercial law, construction law and public law.  Stephen has extensive trial and appellate court experience.  Recently, Stephen has appeared in the Supreme Court in R (Bancoult) v Secretary of State for Foreign and Commonwealth Affairs (No 3) acting for the claimant, and in Cox v Ministry of Justice acting for the Government.

Stephen is very experienced in financial regulation and financial services law.  In particular:

In his commercial and construction law practice, Stephen appears regularly in the High Court both by himself and as junior counsel.

Stephen is highly regarded in public law and is a member of the Attorney General’s B Panel.

Leading decisions in which Stephen appeared include:

Stephen has advised the following clients:

Stephen has advised on the following matters:

Stephen has a developed commercial practice, focussed on high-value energy and finance disputes.  Stephen appears regularly in the High Court, both by himself and as junior counsel.

Stephen has extensive experience of:

Stephen has a developed knowledge and professional experience of company law, commercial remedies, and alternative dispute resolution. Stephen has advised on:

Stephen has close familiarity with a number of overseas jurisdictions, in particular New York, where he is a qualified attorney, and Israel, where he has been a Foreign Law Clerk in the Supreme Court.

Stephen has experience of a broad range of construction litigation and arbitrations, with a focus on the energy sector and leisure developments.

Stephen is also a contributor to ‘Wilmot-Smith on Construction Contracts’ (Oxford University Press, Third Edition), having written the chapter on mistake, frustration and misrepresentation.  Stephen, together with Marion Smith QC, has also spoken on expert evidence and recent developments in the handling of experts.

Stephen has extensive experience of arbitral proceedings, as well as adjudications and negotiations.

Stephen is highly regarded in public law, acting both for claimants and the Government in public law proceedings.  Stephen has appeared regularly in judicial review permission and substantive hearings, both in the High Court and the Upper Tribunal.  He frequently drafts judicial review pleadings, complex opinions, and grounds of appeal to the Court of Appeal and Supreme Court.  Stephen has a particularly developed knowledge of costs in public law proceedings.

Stephen taught Administrative Law and Constitutional EU Law at university and has since advised frequently on EU law.  Accordingly, Stephen is a position to advise on Brexit and associated matters.

From 2018, Stephen has been on the Attorney General’s B Panel of Junior Counsel to the Crown.  Stephen acts for the Government in national security cases of greatest sensitivity.  Further, he has appeared for and against the Government in some of its highest profile recent litigation, including:

Other cases in which Stephen has appeared include:

Stephen has advised the following clients:

Stephen has advised on:

Leading decisions in which Stephen has appeared include:

Kimathi and others v Foreign and Commonwealth Office [2017] EWHC 203 (QB), in which the High Court is considering concerning issues of interpretation regarding the United Nations Convention Against Torture 1984, pleading and proving customary international law, and the extent to which public international law confers rights or causes of action in domestic law, including by reason of the European Convention on Human Rights.

Stephen is also an experienced researcher of complex public international law problems, not least as a result of his time as a Foreign Clerk with the Supreme Court of Israel, which is at the forefront of international law jurisprudence.  During his BCL Degree, Stephen also was awarded the Ralph Chiles CBE Prize for the best performance in Human Rights Law at Oxford University.

Stephen has appeared on the BBC to speak on the public international law and maritime law implications of a diplomatic incident sparked by the actions of the Iranian Revolutionary Guard in the Strait of Hormuz.

“His attention to detail is phenomenal and he has an uncanny ability to find discrete points to nail the case. Stephen thinks commercially and engages well with clients.” Chambers & Partners

“Stephen is a strikingly clever and very versatile lawyer who brings to bear a great deal of wisdom in his analysis.” Chambers & Partners

“His advocacy style is very clear, succinct and authoritative. He’s confident on his feet, gives well-structured arguments and is authoritative.” Chambers & Partners

2011: Admitted as an Attorney to the New York Bar.

2009, Thouron Award to study at University of Pennsylvania.

Full name (as registered with Bar Standards Board of England and Wales): Stephen Kosmin