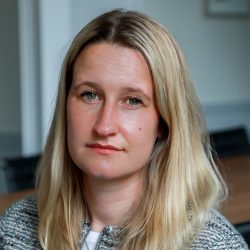 Ruth specialises in all areas of commercial, employment, human rights and public law. Her cases frequently raise issues of private or public international law. She acts in the most high profile and complex cases across her practice areas. Examples of recent and current instructions include acting:

Ruth is recognised as a “Rising Star” in Legal 500 in administrative law and human rights; employment; public inquiries and private international law and is a recognised in Chambers & Partners for employment. She has been described as “a real rising star”, “brilliant in everything she does”, “very commercial”, “exceptionally hard-working” and “a pleasure to work with”.

A member of both the Attorney General’s London C panel and specialist Public International C panel, Ruth has appeared in various courts and tribunals up to and including the Supreme Court. She has experience of acting in arbitrations under the LCIA, ICC and UNCITRAL rules.

Ruth has substantial experience acting both led and unled in the Commercial Court and in arbitrations under the LCIA, ICC and UNCITRAL rules. She has particular expertise in cases involving private international law issues and those that involve state actors.

She has previously acted for clients in the financial services, former professional footballers, insurance companies, entrepreneurs and governments.

Ruth is an experienced employment practitioner who regularly appears in the Employment Tribunal, High Court and the Employment Appeal Tribunal. She has particular experience of acting in applications for injunctive relief including springboard injunctions and acting in “team move” litigation.

She is recognised as “Up and Coming” in this area in Chambers & Partners and a “Rising Star” in Legal 500. She has been described as “a pleasure to work with: insightful and extremely responsive” and is “frequently instructed by governments, NHS trusts, universities, charities and clients in the financial services sector”.

Ruth acts in judicial review and human rights claims and public inquiries. She is currently junior counsel to the Post Office Horizon IT Inquiry. She is ranked as a “Rising Star” in Public Law and Human Rights in the Legal 500.

Ruth has built a strong practice in conflicts of law disputes and is frequently instructed in complex disputes regarding jurisdiction or applicable law. She is recognised as a “Rising Star” in Legal 500 in Travel and Jurisdiction. She has particular expertise in cases where there is an overlap with public international law issues. She is a member of the Attorney General’s Public International C panel of Counsel.

Current and recent cases include:

Ruth has expertise in inter-state dispute and domestic disputes involving state actors. She is a member of the Attorney General’s specialist Public International panel of Counsel. She also advises states in non-contentious settings.

As a Research Assistant to Professor Philippe Sands KC she assisted with the Mauritius v United Kingdom arbitration concerning the application of the Law of the Sea to the Marine Protected Area surrounding the Chagos Islands. She also worked on Croatia v Serbia, a case where both sides were alleging genocide under the Genocide Convention 1948 before the International Court of Justice in The Hague. Both cases involved collaborating as part of a large litigation team.

She has particular interest in cases involving decolonisation. She was previously instructed by the UK Foreign and Commonwealth Office to assist with the Kenya Emergency Group Litigation, a case involving over 40,000 claimants alleging abuse arising out of the Mau Mau uprising in Kenya during the 1950s.

Ruth is instructed in respect of all aspects of commercial fraud, including freezing and search orders and other without notice applications. From May to July 2019 Ruth was seconded to the Civil Fraud team at Peters & Peters Solicitors LLP. During this time she assisted with complex commercial fraud disputes.

Ruth accepts instructions from players, clubs and regulatory authorities with clients ranging from self-employed tennis coaches to the Welsh Rugby Union. She has a particular interest in employment and sponsorship disputes. She regularly appears in the High Court and Employment Tribunal.

“Ruth is excellent – she is commercial and practical in her approach and her advocacy is concise and considered. Ruth also has exceptional client-care skills and very much works as a team with instructing solicitors to deliver for the ultimate client.”
“Ruth is a diligent and exceptionally hard-working junior barrister with a formidable work ethic and attention to detail. She is a real rising star in the field of administrative law.”
“Ruth is a highly intelligent, all-round impressive lawyer, who works well on her own or as part of a large team. Ruth is a clear and persuasive advocate.”
Legal 500 2023

“She is good at cross-examination and client management, and her presentation of a respondent’s case to the client is respectful of their experiences.”
Chambers UK 2022

“An up and coming star. Brilliant in everything she does, and so user friendly.”
“Ruth is very commercial and cuts through to the key issues for clients. Ruth is also incredibly personable.”
Legal 500 2022

“She’s a pleasure to work with: insightful and extremely responsive.”
“She is very calm, personable and thorough.”
Chambers UK 2021

“A cerebral and hard-working junior with extensive expertise in issues of public and private international law.”
Legal 500 2021

Conveyancing fraudsters – who picks up the bill after P&P & Dreamvar? Journal of Professional Negligence, December 2018

The Scope and Effect of Purdah, Judicial Review, December 2017

For the legal year 2016-2017 Ruth was Judicial Assistant to Sir Terence Etherton, Master of the Rolls. Prior to becoming a barrister, Ruth was a Research Assistant to Professor Philippe Sands KC working on public international law, ICSID Arbitrations and Court of Arbitration for Sport cases. She also previously worked as a Research Associate at UCL’s Judicial Institute and a Teaching Fellow in public law at UCL.

Full name (as registered with Bar Standards Board of England and Wales): Ruth Kennedy