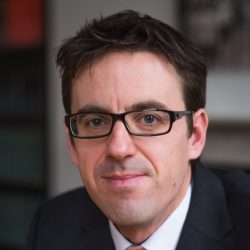 Paul has a busy public law practice as well as experience of employment and general commercial cases. His particular areas of expertise are education, equality and discrimination, human rights, mental capacity, community care and information/data protection. The legal directories say that he is “an academic public lawyer who is super-bright” who “goes above and beyond to secure the best outcome for his client” and “never gives up”. He enjoys working closely with clients to help them achieve their goals and also writes articles and gives talks and training on a regular basis. He is registered for public access which means that he can be instructed by anybody.

Paul provides advice and representation in general commercial matters, usually contractual disputes, professional negligence cases and/or cases which overlap with other areas of his practice. Paul has particular experience of the law on service out of the jurisdiction, having appeared in the Supreme Court case of Baadarani v Abela [2013] UKSC 44.

Paul has considerable experience of all aspects of employment law, on behalf of both employees and employers and has appeared in employment tribunals all over England and Wales as well as in Scotland, and at all appellate levels up to the Supreme Court where he appeared on his own in the case of Gisda Cyf v Barratt [2010] UKSC 41.  He is also a contributor to Tolley’s Employment Handbook.

Paul practises in most areas of public law and appears regularly in claims for judicial review in the High Court and on appeal. For further information see the particular areas below but other areas not mentioned are:

R (O’Brien) v Independent Adjudicator
[2019] EWHC 2884 (Admin), Div Ct, October 30 2019, [2020] 1 WLR 1393
An independent adjudicator, to whom disciplinary charges against prisoners were referred, did not have an express or implied power to refer charges to the police

Paul has been involved in claims under Data Protection Act 1998 since the days when they were much more obscure and rare than they are now. He can advise on cases which raise those issues, together with privacy issues under the ECHR and under the tort of misuse of private information. Paul appeared in the case of R (C) v Northumberland CC [2015] EWHC about the retention by a local authority of child protection records. He has a particular interest in the law governing what journalists can and cannot report about court proceedings.

Education is one of the biggest single areas of Paul’s practice which covers every aspect of this field from pre-school to university. He advises and represents a wide range of clients from all over the country and appears in all relevant tribunals and courts. His past and present clients include schools (maintained, independent and academies), parents, students, local authorities, universities, FE colleges, language schools, qualifications bodies, the Schools Adjudicator, Ofsted and the Department for Education. He appeared in the High Court and Supreme Court in the high-profile “term-time holidays” case of Isle of Wight v Platt [2017] UKSC 28.

Paul’s experience and expertise in this area is in the fields of children’s services (support and accommodation under sections 17 and 20 of the Children Act 1989), former relevant children under the 1989 Act, age assessment disputes, mental capacity/Court of Protection cases. Paul also has some experience of mental health cases and appeared in the Supreme Court case of R (Modaresi) v Secretary of State for Health concerning article 5 ECHR and the duty of the Secretary of State to refer detained patients to the First-tier Tribunal.

Human rights issues arise regularly in most of Paul’s areas of practice and he has considerable experience of advising on them, both from the perspective of the individual and the public authority.

Paul regularly advises and represents local authorities on the areas of law in which he specialises, and also provides talks and training.

Paul is available to act as a mediator or arbitrator in disputes of any nature within his areas of practice. He is always keen to find innovative solutions to resolve disputes in a way that is more amicable and proportionate than formal litigation.

“He’s very approachable, good with clients and a persuasive advocate.” Chambers and Partners

“He has an absolutely encyclopaedic knowledge of very technical areas.” Chambers and Partners

“A real team player who rolls up his sleeves and gets stuck in. He very easily earns the client’s confidence and is very easy to deal with.” Chambers and Partners

“He definitely fights his corner hard.” Chambers and Partners

“He is very knowledgeable on local government matters.” Chambers and Partners

“He’s effective, persuasive and has a nice manner with the court.” Chambers and Partners

“A respected Court of Protection practitioner.” Chambers and Partners

“In a submission of conspicuous ability, Mr Greatorex renewed the arguments that he had presented so forcefully to the Court of Appeal…We are…grateful to Mr Greatorex for his comprehensive and scrupulously fair examination of the arguments.” (Supreme Court judgment, Gisda Cyf v Barratt [2010] UKSC 41)

“A strong advocate who is highly persuasive in his arguments. He never gives up.” Chambers and Partners

“He is a very effective advocate. An academic public lawyer who is super-bright.” Chambers and Partners

“He gives prompt advice, and is very personable and approachable.” Chambers and Partners

Full name (as registered with Bar Standards Board of England and Wales): Paul Greatorex