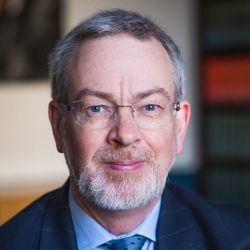 Nigel Giffin practises mainly in the field of public law at 11KBW, although he still undertakes employment law and commercial law cases of certain kinds. His practice covers commercial and environmental judicial review, as well as many aspects of local government law including education, social services, housing, powers and finance and elections. He was formerly a member of the Attorney General’s “A” panel of Counsel to the Crown, and undertook a number of important Human Rights Act cases in this capacity.

He is a CEDR accredited mediator, and has undertaken a number of mediations as both mediator and counsel.

Nigel studied law at Oxford, where he was awarded a first in his degree. He is the author of the chapter on Administrative Court proceedings in Foskett’s Law and Practice of Compromise, and a member of the editorial board of Butterworths Local Government Reports.

Nigel has recently been acting as counsel to the Public Inquiry into the murder of Zahid Mubarek at Feltham Young Offenders’ Institution.

Nigel Giffin KC has practised in local government law for 25 years. He undertakes this work as part of a broadly based public law, public procurement law and human rights practice, in the course of which he appears at all levels of courts and tribunals, including a large number of cases in the Supreme Court, House of Lords and Court of Appeal.

Nigel’s practice includes both a substantial volume of advisory work, and advocacy in litigation. He is a member of the editorial board of Butterworths Local Government Reports.

His particular areas of experience and expertise include the following.

Nigel has regularly advised in this area for many years, dealing for example with:

Significant cases in which he has appeared include:

Nigel Giffin’s understanding, based on long experience, of the context in which local authorities operate, combined with his expertise in public law and procurement law, and his experience in commercial litigation more generally, make him well placed to deal with many issues and disputes concerning local authority contracts. Examples of his work include:

Nigel Giffin is one of the leading public procurement specialists at the Bar, and is very familiar with all the relevant aspects of EU procurement law, as well as domestic legislation and the potential for judicial review in the contracting context. His advisory work has covered:  Numerous town centre development schemes.

Quasi-procurement issues such as the award of casino premises licences. In court, the procurement cases in which he has appeared include the following:

Letting International v Newham LBC (no 2)
[2008] LGR 908
Appeared for successful claimant in then leading case on extent to which sub-criteria and weightings to be used in evaluation process must as matter of EU law be disclosed to tenderer in advance.

Risk Management Partners Ltd v Brent LBC
[2010] LGR 99
Procurement claim concerned application of the Teckal exception to the requirements of the Directive, and time limit for commencing proceedings (case later went to Supreme Court after claim against this defendant had been compromised).

He is currently acting for Virgin Trains in its challenge to the award of the West Coast passenger franchise.

Nigel has also acted as a mediator in procurement litigation, and he regularly lectures on the subject.

This has been another mainstay of Nigel Giffin’s local government law practice. He has frequently advised on issues such as:

Nigel has provided advice in a number of difficult situations arising out of joint working between local authorities, including: the proper apportionment of losses following the discovery of fraud in the operations of a joint committee; one authority’s desire to withdraw from a major joint transport project following a change of political control; and potential financial liabilities of an authority considering withdrawal from a joint waste procurement project.

He has experience in the operation of the Freedom of Information Act 2000 and the Data Protection Act 1998 (appearing for example in the House of Commons expenses case, Corporate Officer of the House of Commons v Information Commissioner [2008] EWHC 1084 (Admin)), and has frequently advised local authorities on these issues. He has also advised on the application of the Regulation of Investigatory Powers Act 2000 in the context of local authority functions.

He has also undertaken a number of cases arising out of local authority elections, acting both for returning officers and for candidates.

Sanders v Kingston (no.2)
[2006] LGR 111
Acted for councillor in successful appeal against disqualification

Nigel began his career as a specialist employment lawyer, appearing in many significant cases including several of the early leading decisions on the application of TUPE to the contracting-out of services, and has continued to take an interest in the field, particularly as it relates to public sector employment (for example, he appeared in the first case on the Fixed Term Employees (Prevention of Less Favourable Treatment) Regulations 2002 to reach the Supreme Court, Duncombe v Secretary of State for Children Schools and Families [2011] UKSC 14). He has also developed a particular interest in the public law aspects of pension provision, including statutory superannuation schemes, and is currently acting for several trade unions in a challenge to the switch from RPI to CPI as an uprating measure in public sector pension schemes.

Examples of his work include:

In connection with his public procurement practice, Nigel has dealt with many waste disposal projects and waste-related contracts, and has become very familiar with this area of activity. He has advised on other waste-related issues as well, including on: the powers of a waste collection authority to instal waste disposal facilities on its housing estates; the legal relations between waste collection and waste disposal authorities; the apportionment of a waste disposal authority’s costs between constituent authorities. He appeared in a challenge to the allocation of landfill allowances in R (Newport CC) v Welsh Ministers [2009] EWHC 3149 (Admin).

Nigel is not a specialist planning law practitioner, but has developed a good general understanding of this area of the law as part of the necessary background to work in the procurement and waste management field, and has appeared in some planning law cases (e.g. R (Belgrave Land Ltd) v Bedford BC [2001] EWHC Admin 1127, Grosvenor 52 [2001] EWHC Admin 1063, and R v Secretary of State for Environment Transport and the Regions ex p. Edwards [2001] ACD 164). He recently acted for an authority being challenged for a failure to make use of compulsory purchase powers to accelerate a regeneration project.

He has advised a number of local authorities on applications to register land as village greens, and has in that connection conducted a public inquiry as the local authority’s inspector. He has also advised a number of authorities on the proper use and management of land held by them as parks and open spaces, and appeared in one of the few cases on the allotments legislation, R v Secretary of State for the Environment ex p. Gosforth Allotments & Gardens Association (1996) 74 P&CR 93.

R ota N v Barking and Dagenham IAP
February 2009
Nigel appeared for the claimant. The Court decided that the comparator test in DDA “less favourable treatment” education claims should be the same as that in Lewisham LBC v Malcolm [2008] 1 AC 1399, and not that in Clark v Novacold [1999] ICR 951.

Letting International Ltd v London Borough of Newham
[2008] EWHC 1583 (QB)
The Court has ruled that contracting authorities are obliged to disclose to tenderers in advance all elements which they will be taking into account when choosing between tenders,including sub-criteria and scoring matrices

R (A) v. B Council
[2007] LGR 813
Woman refused permission by council to drive children to and from school because of old criminal convictions – Decision was neither irrational nor disproportionate

Eisai Ltd v. The National Insitute for Health and Clinical Excellence (NICE)
[2007] ACD 77
Guidelines issued by NICE in relation to the use of Aricept in treating Alzheimer’s disease were discriminatory

R. (A.) v. Secretary of State for the Home Department
Times, September 5 2007
The continued detention, pending deportation, of a failed asylum-seeker after the end of a term of imprisonment because the safety of the public would be at risk and there was a high risk that he would abscond, was not unlawful

R. (Ramsden and Naylor) v. Secretary of State for the Home Department
[2007] ACD 51
Recall of prisoners released on licence – Whether powers conferred by two sections of the Criminal Justice Act 2003 are mutually exclusive

Full name (as registered with Bar Standards Board of England and Wales): Nigel Giffin KC