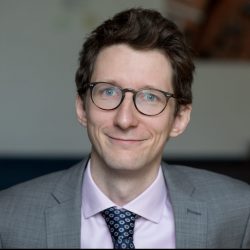 Michael specialises in employment and sports, commercial, information and public law. He has appeared in the Court of Appeal, various divisions of the High Court, the Employment Appeal Tribunal, the County Court, a number of specialist tribunals, and arbitral proceedings.

Michael acts in, and advises on, the following matters in particular:

Michael also accepts instructions across the full range of Chambers’ other practice areas, including financial regulation, procurement and environmental law. Michael is ranked in Chambers and Partners, and described by clients as “very bright”, “very personable”, “commercial”, “practical”, “a safe pair of hands in tribunal”, “collaborative, supportive and a pleasure to work with” and “always attuned to a client’s anxieties and ambitions in the case”.

Before coming to the Bar, Michael spent six months in Freshfields Bruckhaus Deringer’s international arbitration team in Paris, assisting on English-law commercial arbitrations and investor-state disputes. He also worked on death-penalty appeals in Louisiana and as a consultant in the Legal Office of the United Nations World Food Programme in Rome.

Michael has substantial experience in commercial law – particularly, but not exclusively, in the context of employment and business protection. Michael also acts on commercial disputes in other contexts, and has previously worked on commercial matters at Freshfields.

Examples of Michael’s recent work in the commercial and business-protection arena include:

Michael has extensive experience in acting for both respondents and claimants in statutory employment-law proceedings before the Employment Tribunal. These range from simple claims of unfair dismissal to complex, multi-day trials involving allegations of whistleblowing, discrimination and harassment. Michael also has experience in sports law.

Much of Michael’s work in the employment-law arena is unled, but he also has experience acting with various KCs and leading juniors in the field. Examples of recent work include:

Michael has experience in acting unled in numerous other applications for strike-out / deposit orders, case-management hearings and complex trials. He also advises regularly in respect of liability, quantum and strategic risk across the full spectrum of employment law.

Michael has particular experience in acting for defendants to data-breach and related claims, and is able to advise on appropriate strategic measures for tackling both vexatious, low-value claims (which can nonetheless put a significant drain on a defendant’s resources) and high-value, higher risk claims. Michael also has claimant-side information-law experience.

Much of Michael’s work the information-law arena is unled. Examples of recent work include:

Michael is co-author of a chapter on ‘Information Law’ in the ‘Education Law Handbook’ (2021).

Michael has acted for individuals, local government, government ministries and government agencies in a number of actual or threatened judicial reviews. Michael’s work in this field has included:

Full name (as registered with Bar Standards Board of England and Wales): Michael White