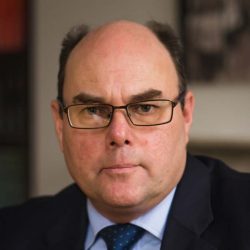 Protection of Business Interests where affected by cyber security and data breaches, the misuse of confidential information, fraud, fiduciary wrongdoing, and unlawful competition

Clients value the commercial judgment he brings to cases having been a litigation partner in a leading City law firm before coming to the Bar. He also brings experience and insight to the sensitive handling of internal investigations, and the independent chairing of complex internal disciplinary processes.

In the matter of Bannatyne Fitness Limited in which he appeared for Duncan Bannatyne on an Unfair Prejudice petition and related claim concerning the departure of the Managing Director of the Bannatyne Group, issues included the meaning of a Contingency Agreement in event of takeover.

In the matter of Cloudbluff Properties Limited & Ors in which he  appeared for the Gibraltar trust company as majority shareholder on the Unfair Prejudice petition [2011] EWHC 649 (Ch) and in related trust claims in Gibraltar to establish the assets of a Gibraltar Settlement affecting the shareholdings in the English property holding companies, and for the companies in connected director misfeasance proceedings.

In the matter of Moorevale Limited in which he appeared for the claimant obtaining injunctive relief ancillary to the unfair prejudice petition alleging the diversion of business opportunities  by the majority.

Qayoumi v Oakhouse Properties [2001] Al ER (D) 245 in which he appeared for the claimant in what was described by the trial Judge as a “bitterly contested and complex derivative action”.

Partnerships and LLPs: As a former Partner in a City law firm himself, he brings insight and experience to Partnership and LLP disciplinary, expulsion and compulsory retirement questions, restraint of trade issues and to the negotiation of exit terms for partners and associates.  He has helped both leading firms and members in such situations.  These cases are confidential. He has recently acted on the dissolution of a property investment partnership.

Lord Ballyedmond v Trimble (2011): appeared for claimant in action to restrain and seek redress for anonymous internet campaign of defamation and disclosure of confidential sales and pricing information, including assessment of Wrotham Park damages.

Hays Specialist Recruitment v Ions  [2008] IRLR 904: appeared for defendant on this first case on the competition ramifications of employee usage of the LinkedIn networking website to aggregate customer information.

Experienced in freezing orders, tracing claims and the marshalling and presentation of complex forensic evidence. Illustrative cases include:

Abramovich v Hoffman (2019): appeared for claimant in claims for breach of fiduciary duty and negligence against her former Head of Family Office and European Projects; issues as to agent’s duties when in control of private corporate vehicles.

TP ICAP v Stichman (2018) appeared for claimant in proceedings to freeze and recover the proceeds of a long running deception by an errant employee using false accounting and diversion of assets.

SAIPEM v Barrett, Ewart, Stanley (2016): appeared for SAIPEM in a claim to recover the proceeds of a substantial fraud by its payroll officer, obtaining freezing orders and proprietary injunctions, tracing the funds into the hands of third parties, obtaining judgments against the laundering recipients and enforcing disclosure orders by committal for contempt, see [2017] EWHC 2106.

Sanders & Or Noteholders v Trigor One Limited (2014): appeared for claimant investors in a claim for misrepresentations in a Gibraltar Fund Investment Prospectus, including the issue of whether there was a concluded English jurisdiction agreement under Council Regulation (EC) 44/2001, Art 23, see: [2014] EWHC 1646 (Comm)

(2020): acted for online education provider in the enforcement of management investor covenants.

Mayday Healthcare v Brighton & Sussex University Hospitals Trust (2017): appeared for defendant NHS Trust in case over the supply of temporary agency nursing and healthcare workers; validity of transfer fees charged by claimant; whether onerous and operated in restraint of trade.

Has undertaken numerous roles as independent Chair of complex internal disciplinary proceedings, as investigator into potential disciplinary charges, and in leading internal inquiries into regulatory, culpability, and apportionment of liability issues. Other work in this area:

Brewcorp v Financial Service Commission (BVI): appeared (with Lord Pannick) for a BVI international company in a judicial review and constitutional rights challenge to conduct by the BVI FSC in aid of a foreign regulator, and made applications for the obtaining of orders for disclosure and cross-examination against the Commission.

Gregory v Portsmouth City Council [2001] AC 419: whether the tort of malicious prosecution should be extended to disciplinary proceedings.

Sheriff v McLaren Automotive Limited (2014): appeared for claimant in claim for breach of right to participate in share scheme; valuation of lost rights.

Ad hoc :“earn-out” provisions in a Share Purchase Agreement relating to the acquisition of an ISP.

Comments referred to in Chambers & Partners UK Bar Guide and the Legal 500 Directories over recent years include:

“combines considerable commitment and professionalism with a proactive and commercial approach”

“Hugely committed and good on his feet. His preparation for High Court cases is miraculous  and meticulous and solicitors particularly appreciate his pragmatism and great attention to detail”

“He is an excellent adviser on injunctive relief work. He has a very clear and commercial approach.” “He is a cerebral person who masters complexity with verve.”

“His advocacy skills are second to none. He is my number one choice.”

“He is very thorough and a very strong cross-examiner”

“He is very dogged, determined and possessed of a great will to win”

In the matter of Cloudbluff Properties Limited [2011] EWHC 649 (Ch)
Unfair Prejudice Petition; whether a Gibraltar company as a volunteer transferee of shares was automatically bound by equitable constraints affecting the transferor.

Full name (as registered with Bar Standards Board of England and Wales): Julian Wilson