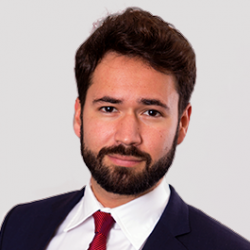 “Combines a supreme intellect with dedication and leadership” (Legal 500)

“calm and unflappable. He is a true standout among a large crowd of rising stars.” (Legal 500)

“Charming, articulate, will get stuck into anything, and is very good indeed with clients. He has remarkable breadth of experience for one so junior.” (Legal 500)

“a real pleasure to work with” (Chambers & Partners)

Jamie is described in the Directories as “undoubtedly a star of the future”, “very energetic, extremely intelligent and responsive” and “very bright and hard-working” with “an excellent mind”. He is regularly instructed in heavyweight matters against barristers many years his senior.

Jamie speaks to law firms about a range of legal topics. For more details about Jamie’s writing and speaking, please visit www.jamiesusskind.com.

Jamie has an unusual level of courtroom and tribunal experience for a barrister of his call and is often instructed to appear against barristers many years his senior. He is frequently instructed in cases involving a cross-border dimension or particular complexity.

Jamie is the co-author of two chapters in International Employment Disputes (Eds. Oudkerk and Rogers, Sweet & Maxwell, 2019).   He regularly speaks to law ﬁrms about trends and tactics in employment matters.

Jamie has a thriving commercial practice and appears regularly in the High Court, as sole counsel and as part of a team. As sole counsel, his clients have included Uber, BT, a Brazilian Premiership footballer, and a well-known US Law Firm. He also brings experience of international commercial arbitration, and disputes in the ﬁnancial services, mining, oil, entertainment and media, retail, and hospitality sectors. Jamie takes a keen interest in cases involving the tech industry.

His current and recent work includes:

Jamie trained as a public lawyer and has written extensively about governance, regulation, and issues relating to free speech and privacy. He was most recently instructed in a judicial review challenge to the use, by the Prime Minister and others, of non-government communications systems when conducting government business.

Jamie also acted for the Claimants (led by Brian Kennelly KC) in a judicial review of the DPP’s decision not to prosecute a neo-Nazi for crimes contrary to the Public Order Act 1986. In response to the litigation, the Crown Prosecution Service quashed its own decision. This case received national coverage from (among other outlets) The Guardian, The Independent, BuzzFeed, and the BBC.

Jamie accepts instructions in cases relating to tech, data, and privacy law, including for the ICO. He is internationally recognized as an expert in legal issues relating to digital technology and the tech industry. He has held fellowships at Harvard and Cambridge Universities, as well as the Berggruen Institute in California.

He is the author of Future Politics: Living Together in a World Transformed by Tech (Oxford University Press, 2018) and The Digital Republic: On Freedom and Democracy in the 21st Century (Bloomsbury, 2022).  Future Politics received the Estoril Global Issues Distinguished Book Prize for 2019, and was an LSE, Prospect, and Evening Standard book of the year. Jamie’s work was cited by Lord Sales in his BAILII lecture, Algorithms, Artiﬁcial Intelligence, and the Law.

“Fantastically responsive and involved”, “incredibly insightful” and “a real pleasure to work with”. (Chambers & Partners)

“Combines a supreme intellect with dedication and leadership, and is calm and unflappable. He is a true standout among a large crowd of rising stars. One of the best examples of a born KC – he is so obviously going to make it to the top.” (Legal 500)

“Charming, articulate, will get stuck into anything, and is very good indeed with clients. He has remarkable breadth of experience for one so junior – and as a prize winning author has particular expertise on the intersection between employment law and technology, meaning that he is perfectly placed to usher in the brave new world of technology in the workplace.”  (Legal 500)

“Undoubtedly a star of the future”, “very energetic, extremely intelligent and responsive” and “very bright and hard-working” with “an excellent mind”. (Chambers and Partners)

The Digital Republic: On Freedom and Democracy in the 21st Century (Bloomsbury, 2022)

Future Politics: Living Together in a World Transformed by Tech (Oxford University Press, 2018).

Jamie has recently contributed articles to the New York Times, The Times, Wired, Fast Company, the New Statesman, and elsewhere.

Jamie’s interests outside the law include politics, history, golf, coffee, and his miniature dachshund. His first book was an academic monograph called Karl Marx and British Intellectuals in the 1930s (Burford: Davenant Press, 2011). As a youngster he was captain of the England Schools Debating Team and, at one stage, ranked the best individual debater in the world.

In 2011 Jamie studied Kung Fu with Shaolin monks in a mountainous region of eastern China – an experience from which he is still recovering.

Full name (as registered with Bar Standards Board of England and Wales): Jamie Susskind