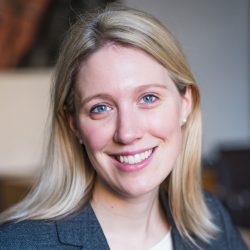 Heather Emmerson practises in the areas of public law, regulatory law, professional discipline, data protection and information law. She is ranked as a leading junior in Chambers and Partners across all main areas of her practice and described as “fiercely bright”, “a genuine rising star” and “a consummate professional”.  Heather has appeared before a wide range of courts, tribunals and public inquiries and is regularly instructed in proceedings before the High Court, Court of Appeal and Supreme Court.

In the sphere of public law, Heather is instructed by both claimants and public authorities to undertake advisory work and act in litigation. She has particular expertise of judicial review proceedings. Her public law practice spans a broad range of areas including housing, immigration, human rights, education, healthcare, planning and environmental and local government law. Heather has been involved in a number of high profile public law cases including three recent cases before the Supreme Court (R (Stirling) v Haringey London Borough Council [2014] UKSC 56 which is the leading authority on consultation, Hotak v Southwark London Borough Council [2015] UKSC 30 concerning the “priority need” provisions of the Housing Act 1996 and McDonald v McDonald [2016] UKSC 28 concerning article 8 defences to claims for possession proceedings brought by private landlords). Heather is featured as a leading public law junior in the legal directories and described as “incredibly bright and combines that with being practical and user-friendly”, “incredibly bright, user-friendly and her written pleadings are eloquent and focused”, “extremely good, intelligent and provides clear advice” and “a real rising star, and outstanding for her level of seniority”.

Heather has particular expertise in local government law and is regularly instructed to advise local authorities on a range of public law issues and bringing and defending claims. She has extensive experience of conducting judicial review claims in the High Court and has been instructed in a number of the leading public law cases relating to local authorities including (R (Stirling) v Haringey London Borough Council [2014] UKSC 56 which is the leading authority on consultation and Hotak v Southwark London Borough Council [2015] UKSC 30 concerning the “priority need” provisions of the Housing Act 1996. Heather is ranked as a leading junior in local government law and described as “versatile, bright and highly personable” in this field. Heather is a member of the Attorney General’s C Panel of Treasury Counsel.

Heather has extensive experience in the field of regulatory law and professional discipline including advising regulatory bodies and regulated individuals and firms. She is frequently instructed in disciplinary proceedings and High Court claims in this area. Heather regularly appears before the Solicitors Disciplinary Tribunal and is also instructed in wide range of judicial review proceedings and statutory appeals relating to the regulation of lawyers and medical professionals. Heather is ranked as a leading junior in Legal 500 and Chambers and Partners in the sphere of professional discipline and described as “hardworking, intelligent and charming to work with”, “incredibly bright, practical and user-friendly, “a wonderful advocate” and “a genuine rising star, she is a consummate professional in terms of application, preparation and presentation.”

Heather is an experienced data protection and privacy practitioner. She regulatory advises public bodies, individuals and companies on data protection issues including data breach cases. She is currently instructed in relation to i) a ground-breaking group litigation claim arising from a data breach at a FTSE 100 company, ii) an appeal due to be heard by the Supreme Court in July 2017 relating to the retention of historic gender data of transgender customers by the Department for Work and Pensions and iii) a number of claims before the European Court of Human Rights relating to the retention of biometric data and conviction information.

Heather is a public law and human rights specialist and is able to apply her experience and knowledge of article 8 issues to the sphere of data protection. Heather also has a keen interest in media law and was instructed as part of the team of Counsel to the Inquiry on the Leveson Inquiry in relation to the press and the media. She is ranked as a leading junior in this area in Chambers and Partners and described as “fiercely bright.”

Heather is an experienced information law practitioner. She regularly advises on information law issues in a range of contexts. She has acted for and advised central and local government, regulatory bodies, NGOs and individuals on FOIA issues and has extensive experience of appearing in both the First Tier Tribunal and Upper Tribunal in FOIA cases.

“She’s very impressive in her appearances and presentations, very calm under pressure and very strong at reading the courts and tribunals. She understands strategically where the case needs to go and can steer others in the right direction.” Chambers & Partners

“Has an encyclopaedic understanding of the law combined with the ability to relate to clients, and fantastic advocacy skills.” Chambers & Partners

“Very strong in formulating case strategies. She has an impressive ability to absorb large quantities of evidence and identify key issues.” Chambers & Partners

“She’s very calm under pressure, and very strong in reading the courts and tribunals.” Chambers & Partners

“An excellent team player who is extremely bright and quick to pick up the arguments.” Chambers & Partners

“Enormously clever, very good at drafting and impressive in her presentations. She is calm under pressure, strong at reading the courts and tribunals and is good at steering others. She is also very incisive around the dynamics of the case.” Chambers & Partners

“She is a talented, hardworking and charming opponent who is both intellectual and pragmatic.” Legal 500

“Unfailingly industrious. She is undoubtedly one of the best juniors working in the human rights arena.” Legal 500

“She makes the effort to get what clients want.” Chambers & Partners

“Extremely bright and personable. She knows the law backwards and makes really well-pitched submissions. She also gets on extremely well with clients.” Chambers & Partners

“She has a good manner in court and is very client-friendly.” Chambers & Partners

“A talented, hardworking and charming opponent who is both intellectual and pragmatic.” Legal 500

“She appears in the most high-profile SDT cases.” Legal 500

“Extremely bright, quick to pick up the arguments and an excellent team player.” Chambers & Partners

“She is sharp, very user-friendly and has a very good manner both with the client and in court.” Chambers & Partners

“She’s very clear and incisive, and very strong at developing a strategy which is most likely to get what the client wants.” Chambers & Partners

“Fiercely intelligent and able to manage the demands of very complex and high-profile cases.” Chambers & Partners

“Incredibly bright, very helpful and very good on her feet. Her paperwork is superb and she has very good attention to detail.” Chambers & Partners

“She is incredibly bright, practical and user-friendly. She’s a wonderful advocate.” Chambers and Partners

“A genuine rising star, she is a consummate professional in terms of application, preparation and presentation.” Chambers and Partners

“Her written pleadings are eloquent and focused.” Chambers and Partners

“Heather is extremely good, she is intelligent and provides clear advice.” Chambers and Partners

“Hardworking, intelligent and charming to work with” Legal 500

R (Francis) v Secretary of State for the Home Department
[2015] 1 WLR 567, [2014] EWCA Civ 718, CA, May 23 2014
A prisoner had been lawfully detained pending deportation, but his detention became unlawful when it became clear that there was no longer any prospect of deportation within a reasonable time.

R (Plantagenet Alliance Ltd) v (1) Secretary of State for Justice; (2) University of Leicester
[2013] EWHC 3164 (Admin), [2014] ACD 26
Instructed as junior counsel in an application to set aside a protective costs order granted in favour of the Claimant in a judicial review concerning the burial of King Richard III.

Instructed as junior counsel in an appeal heard by the Court of Appeal concerning the meaning of priority need under section 189 of the Housing Act 1996 (Hotak v London Borough of Southwark [2013] EWCA Civ 515).

Instructed as junior counsel in a challenge to detention of a foreign prisoner. The case raised a number of complex legal points relating to the Secretary of State’s powers of detention and extent to which this power is vitiated by material public law errors.

Instructed in a number of judicial review claims challenging the lawfulness of detention of foreign national prisoners, and in particular bringing claims on behalf of a number of Iranian detainees following the closure of the Iranian embassy in London in November 2011.

Appeared in the High Court and the Court of Appeal as junior counsel (led by Philip Coppel QC) in a case challenging the legality of the imposition of parking charges for motorcycles in Westminster: [2010] EWHC 1825 (Admin) and [2011] EWCA Civ 432.

Instructed as junior counsel (with James Goudie QC) in a judicial review claim challenging the sale of land to a developer on the grounds of breach of s.123 of the Local Government Act 1972 (London Jewish Girls High Ltd v LB Barnet (2013) LGR 387).

Instructed as sole counsel in a 3 day planning inquiry relating to an appeal against an enforcement notice.

Heather was instructed by a local planning authority in a 3 day planning appeal against a refusal to permit a significant mixed used scheme in North London.

Heather acted for a local authority in confirming a public footpath over land adjacent to the River Thames in Marlow.

In 2010-2011 Heather was instructed as junior counsel in complex litigation over a twelve month period involving a claim of misrepresentation and a petition of unfair prejudice under the Companies Act 2006.

Drafting a claim issued in the High Court alleging breach of directors duties, fiduciary duties, and misuse of confidential information.

Acting for an energy supplier in a contractual dispute arising from non-payment for supply of electricity.

Acting for a property developer in a construction dispute arising from defective work.

Instructed by the Solicitors Regulatory Authority as junior counsel (with Hodge Malek QC) in a case concerning mortgage fraud and breach of the provisions of the CML Handbook.

Instructed by the Solicitors Regulatory Authority as junior counsel (with Mark Cunningham QC) in a case concerning conflict of interest and lack of independence on the part of a solicitor.

Instructed as sole counsel by the Solicitors Regulatory Authority in relation to proceedings arising from misappropriation of client funds.

Instructed on behalf of a solicitor (with Hodge Malek QC) to appear in the SDT in a case arising from over-billing of clients.

Before coming to the Bar, Heather graduated from St Catharine’s College, Cambridge with a first class degree in Law.

Heather is a member of the Administrative Law Bar Association and the Association of Regulatory and Disciplinary Lawyers.

Full name (as registered with Bar Standards Board of England and Wales): Heather Emmerson