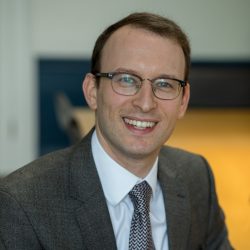 He is ranked in the Legal 500 for administrative and public law, data protection, and employment law, and in Chambers and Partners in administrative and public and data protection law.  Daniel has also been appointed to both the Attorney General’s and the Equality and Human Rights Commission’s C Panels of Counsel and to Sport Resolutions’ Pro Bono Legal Advice Panel.

Daniel was previously the Judicial Assistant to Lord Sumption and Lord Carnwath at the Supreme Court, assisting the Justices on a number of the leading and high-profile cases across Chambers’ areas of practice.  Before coming to the Bar he was a fast-streamer at the Ministry of Defence.

Daniel accepts instructions (both led and unled) in all areas of commercial dispute resolution and business protection matters.  He has particular experience in claims relating to breach of directors’/fiduciary duties and boardroom disputes.

In addition to the business protection matters above, Daniel has built up experience on a range of statutory and common law employment matters, including claims under the Equality Act, unfair dismissal, minimum wage, working time and redundancy-related claims.  He regularly appears as sole counsel before the Employment Tribunal, including in multi-day trials.

Daniel is particularly well-placed to advise and frequently acts on matters relating to employee-shareholders and employee-directors, and the overlap between employment and company law, including boardroom disputes and breaches of directors’ and/or fiduciary duties.

Recent and ongoing instructions include:

He has developed particular expertise in state immunity matters before the Employment Tribunal, and is regularly instructed as sole counsel on behalf of foreign states.

Daniel is particularly well-grounded in equality and discrimination law following his involvement in Essop v Home Office, Naeem v Secretary of State for Justice [2017] UKSC 27, concerning whether in an indirect discrimination claim there is a need to establish why a provision, criterion or practice causes individuals with a protected characteristic particular disadvantage (as a judicial assistant).  He is also a member of the EHRC’s C Panel of Counsel.

Daniel is also a member of the Attorney General’s C Panel of Treasury Counsel.  He acted for the successful defendants in R (EU Lotto Ltd and others) v Secretary of State for Digital, Culture, Media and Sport [2019] 1 CMLR 41, an EU law challenge to the ban on betting on non-UK Euromillions lotteries; and R (MP) v Secretary of State for Health and Social Care [2018] EWHC [3392] (Admin), consultation- and PSED-based challenges to reforms to the regime for charging ‘overseas visitors’ for NHS services.

Recent and ongoing instructions include:

With his background at the Ministry of Defence, Daniel has particular experience and expertise in defence and national security matters.  He was the Deputy Executive Editor (Print) of the Harvard National Security Journal and has acted as a researcher for the then-Independent Reviewer of Terrorism Legislation, David Anderson KC.

In the national security field, Daniel acted for the Government in Bank Mellat v HM Treasury concerning the bank’s original damages claim, as well as its challenge to subsequent sanctions orders.  He has been involved in Belhaj v Straw [2017] UKSC 3, regarding the application of the ‘foreign act of state’ doctrine (as a judicial assistant).  Daniel has also developed significant experience in relation to historical claims in the defence and national security context, including the Kenya Emergency Group Litigation, instructed through the GLD’s ‘junior junior’ scheme.

During his time as a judicial assistant, Daniel worked on the leading constitutional cases before the Supreme Court, including R (Miller) v Secretary of State for Exiting the European Union [2017] UKSC 5, regarding the Government’s ability to notify the EU of the UK’s withdrawal under Article 50 TFEU without Parliamentary approval.

Daniel is experienced in a wide range of complex issues of public international law, with a particular expertise and interest in questions of immunities and privileges (especially under the VCDR).  He is regularly instructed as sole counsel on behalf of foreign states in relation to issues of state immunity.

He has been involved in most of the leading recent cases on questions of immunity, including:

Daniel has worked on further PIL matters, including Al-Waheed v Ministry of Defence [2017] UKSC 2 on the power under international law to detain in a non-international armed conflict (as a judicial assistant); as well as during his time as a ‘Foreign Law Clerk’ at the Supreme Court of Israel.

Daniel also has a significant data protection practice, focusing in particular on ‘data breach’ claims, involving the compromise of the personal data of a large number of data subjects, whether inadvertent or by cyber-criminals.

He currently acts for the defendant in the British Airways Group Litigation arising out of the cyber-attack on BA’s systems in autumn 2018 – the first mass piece of group litigation under the GDPR. He is also acting in a number of other data breach claims, each with potentially significant numbers of claimants.

“Daniel Isenberg is very user-friendly. He gives commercial advice, is nice to work with and is knowledgeable.” Chambers & Partners

“He is an excellent advocate who is robust and commercial.” Chambers & Partners

“He has a good command of case law and he is not afraid to push the boundaries in developing fresh legal arguments that have not been run before.” Chambers & Partners

“First-rate professional in mind and in practice. A future heavyweight silk without doubt.” Legal 500

“Daniel has a superb intellect. He is good at analysing the legal issues in a case, and writes extremely well.” Legal 500

“Daniel to be wise, practical and incredibly adaptable and responsive. A great team player who was good at building a rapport with the client and offering solutions to knotty problems in a fast-paced matter.” Legal 500

“One of the smartest juniors I’ve met in a long time; his writing’s excellent and his judgement’s superb.” Chambers & Partners

“Clearly highly intelligent and gets to the heart of the issue very quickly. He also has an excellent manner with clients and a great ability to distil complex legal matters into clear, commercial advice.” Legal 500

Other awards and prizes:

Prior to becoming a barrister Daniel spent two years as a desk officer in the fast-stream at the Ministry of Defence.  He worked on various national and international security matters, including the defence effort for the London 2012 Olympics.

Daniel has also previously spent time as a ‘Foreign Law Clerk’ to Justice Hanan Melcer at the Supreme Court of Israel; volunteered as a student attorney at the Harvard Prison Legal Assistance Project; and regularly contributed to the UK Human Rights Blog.

When he can, Daniel enjoys competitive ballroom and Latin dancing; he (less frequently) brews his own cider; and (even less frequently) officiates at rugby matches as an RFU-certified referee.

Full name (as registered with Bar Standards Board of England and Wales): Daniel Isenberg