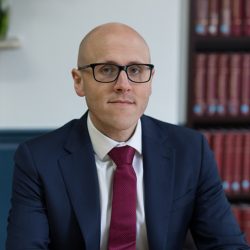 Christopher joined chambers from Australia in October 2018. He was a lawyer in Australia in 2011 and commenced practising as a self-employed barrister in January 2015.

He accepts instructions across most of Chambers’ core areas of practice.

Prior to commencing practice at the bar, he was a clerk to a number of judges including the Chief Justice of the Federal Court of Australia. He also worked as a graduate lawyer for a leading Australian claimant firm and as a political advisor to parliamentary candidates, senators and parliamentary office-holders.

Christopher has a keen interest in media, privacy, data protection and information law.

He graduated first in his cohort in the Master of Laws (Intellectual Property and Information Law) at King’s College London.

Previously, Christopher was also a Media and Policy Advisor to an Australian Senator and a Campaign Director for targeted seats in election campaigns. He is well placed to assist with media strategy and reputation management.

Christopher was the author of the Defamation chapter of the Australian Torts Reporter and has provided substantial commentary to the Australian Privacy Reporter.

Christopher’s practice in this area has included:

Christopher acts and advises in a range of public law and human rights matters. Since commencing practice in London, he has advised local authorities and central government on issues including land ownership and Article 5 of the European Convention on Human Rights. He is a member of the Government Legal Department’s Junior Barrister Scheme. He has also assisted at pre-action stages with proposed judicial reviews.

Christopher is building a practice in procurement law.

He was instructed to act for the London Borough of Hammersmith and Fulham (led by James Goudie KC and instructed by Sharpe Pritchard LLP) to resist an application for permission to appeal and was also instructed to draft submissions on the appeal (judgment reserved).

He has also been instructed by Ashurst LLP to provide assistance in relation to an ongoing procurement claim.

Since joining Chambers, Christopher has developed a trial practice in Employment Tribunal matters – acting regularly for both Claimants and Respondents in multi-day hearings. Recent cases include:

He also provides commercial advice on the management of delicate employment situations.

Prior to joining Chambers, Christopher’s employment practice included acting for terminated football coaches, subsidiaries of international mining companies and one of the largest labour hire firms in Australia. He is experienced in employment cases conducted in courts and tribunals as sole counsel and with a leader. In 2017, Chris was identified as an ‘Emerging Junior’ in the area of employment and work health and safety law in Australia.

His significant Australian cases have included:

Christopher has acted for claimants and defendants in numerous commercial disputes as sole counsel.

Christopher has also advised on complex procedural issues arising out of potential litigation in the UK concerning defendants in foreign jurisdictions.

He brings with him to this practice area his significant experience in defending serious and complex criminal prosecutions (including sexual allegations, murder and fraud) at the bar in Australia. He also has experience of inquiries in Australia, having been instructed to act for the Australian Labor Party (Victorian Branch) in the Trade Union Royal Commission.

LLB, University of Sydney – Hons I

Christopher is an enthusiastic but inept student of Spanish. He enjoys dabbling in guitar, bass, screenwriting and comedy. He is believed to hold the record for least tries scored on his Tag Rugby team.

Full name (as registered with Bar Standards Board of England and Wales): Christopher Parkin